What is a Domestic Hot Water System?

A Domestic Hot Water (DHW) system provides potable hot water to our sinks, showers, and tubs and other places where hot water may be ingested by, or come in direct contact with humans. This is as opposed to non-potable water which is not suitable for drinking and other domestic purposes but may be used for hydronic heating, industrial cleaning and other applications. Most plumbing codes specify that all piping, components, and heat-transfer devices in contact with the potable water shall be intended for use in potable water systems.

Typical commercial DHW systems consist of one or more boilers that provide a reserve of hot water for use. Since demand for hot water is not uniform across the day, DHW control systems are sized to try to balance the costs of heating large tanks of hot water, while still being able to meet the anticipated demand during a peak period (usually when people are getting ready for work in the morning)

The diagram below shows a typical configuration for a domestic hot water system with a single boiler/storage tank. Many configurations for a DHW system are possible depending on the size, age, demand profile and layout of the buildings involved but they all share a few basic components.

A typical Domestic Hot Water heating configuration showing these components is below: 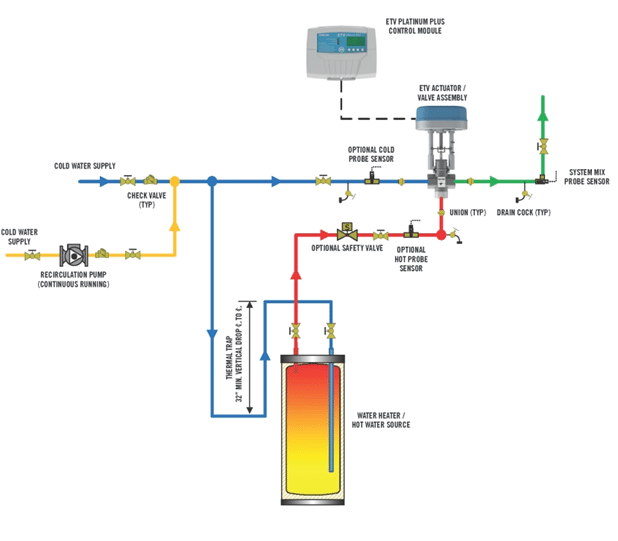 In this system, the hot water tank is providing superheated water at 160F to a 3-way mixing valve that cools it for delivery to the tap at ~110F.

Other Key Design Considerations for a Domestic Hot Water System

The bacterium legionella pneumophila is found in both potable and non-potable water systems. Studies have shown that Legionella does not grow in cold water below 89.6F1 but in water temperatures above 90F especially in stagnant water between 95F (35C) and 122F (50C), legionella bacteria begin to multiply. Legionella can cause legionnaires’ disease or legionellosis, a severe, often lethal, form of pneumonia that occurs primarily when steam or water vapor containing legionella is inhaled. The disease’s name was coined in 1976, when American Legion members who attended a convention in Philadelphia, suffered from an unusual lung infection (pneumonia). Legionella cases have been on the rise for over a decade, with several outbreaks identified in large cities, that have caused severe illness and death. Our society is vulnerable to these waterborne bacteria, and the HVAC/plumbing industry is responsible to do what it can to protect the public.

Studies show that flushing a water system to effectively kill legionella requires water temperature over 160F (71C) throughout the entire piping network for at least 30 minutes; at lower temperatures, some bacteria can remain protected inside the biofilm lining the pipes.

Yet if water at this temperature were to come in contact with your hands, severe scalding would occur in only 2-3 seconds. Key to satisfying both objectives is the use of an ASREE mixing valve which allows systems to maintain high temperatures in the DHW storage tanks, while mixing that water with cold supply to derive just the right temperature.

A valve like the Heat-Timer Electronic Tempering Valve (ETV) is often used as the mixing valve in domestic hot water applications. Whether the system uses boilers and tanks, or generates hot water instantaneously, the function of this valve is absolutely critical in preserving the safety equation. Water must be heated to 160F kill legionella, and a 3-way mixing valve must be used to scalding at the tap. Under control of a programmable console, the motorized valve is automatically adjusted to drive the perfect temperature of water through the system using temperature sensors placed on piping to record the exact temperatures (1 degree accuracy).

Visit our website pages for more information on how domestic how water systems work, or contact a Heat-Timer Representative today