Recently we asked the head of one of the larger Commercial HVAC companies in northern New Jersey, whether they used a standard 3-way mixing valve when installing commercial tankless water heaters.

“No,  you don’t need one…” was his answer. His opinion is not uncommon.

It is also dead wrong.

It turns out that the science and biology of Legionella growth and transmission does not support that claim at all. Installers of commercial grade tankless systems are creating a potential health risk and putting themselves and their clients in legal jeopardy, by recommending that HVAC technicians can omit the installation of an ASSE 1017 tempering valve solution.  By referencing partial facts and drawing incomplete or cherry picked scientific conclusions, the current installation practice advocated by many tankless manufacturers is in fact, creating a real public health risk.

Getting Back to the Science

As covered in the first part of this discussion, there are many reasons, both known and unknown, for the increase in Legionella cases since 2000. Contrary to conventional wisdom, it turns out that the adoption of ASHRAE 90.1 in 2001 actually increases the probability of Legionnaire bacteria as it allows for water storage at a temperature that allows the bacteria to survive.  ASHRAE 90.1 was adopted under heavy pressure from manufacturers who wanted to be able to offer cheaper equipment that ran at lower temperatures but at the end of the day, the science does not support the safety claims of recommendation and it never has.

At a recent industry convention, a manufacturer rep for one of the leading commercial tankless water heater products made the following claim:  that if you maintain your water heater system generally in the 118*F to 120*F that Legionella does not grow and therefore that is a safe operating range for instantaneous water heaters saving both energy costs, and the need for a mixing valve.

As justification, they presented the table below: 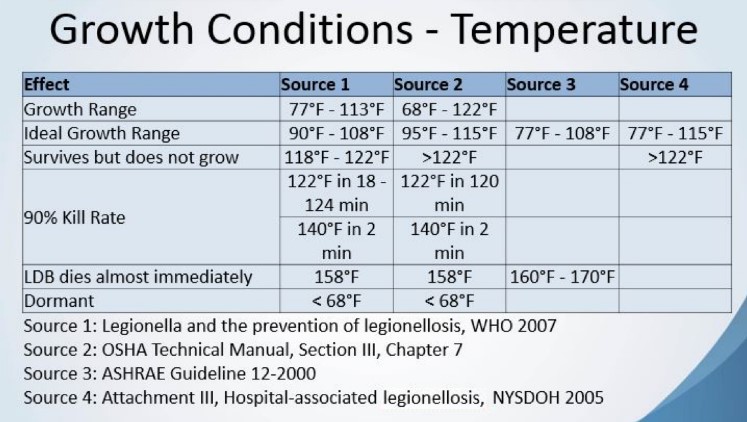 A more common chart that shows the relationship of temperature and Legionella is the chart based on the study completed in 1989 – “Viability of Legionella Pneumophilia in Chlorine-free Water at Elevated Temperatures” and is used as a reference by such organizations as ASSE and OSHA. 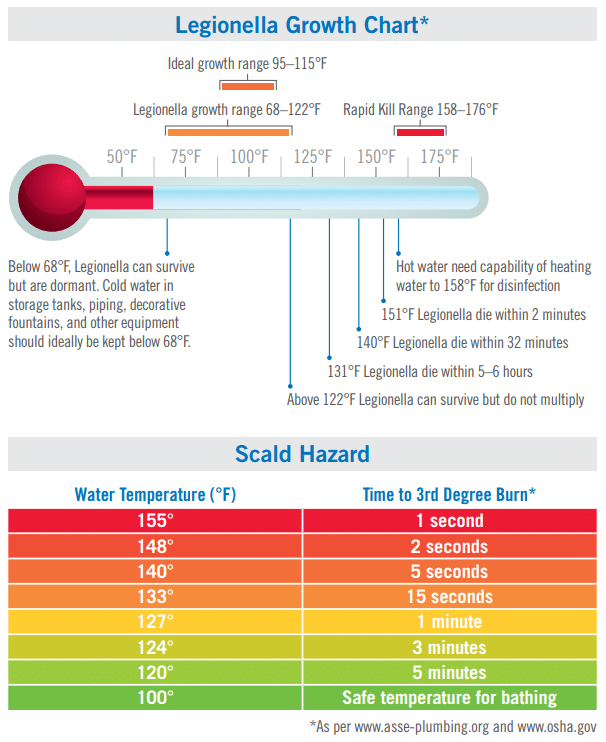 This chart shows the water temperature in which the Legionella bacteria cannot survive and is totally eliminated.  It also shows that Legionella die-off only begins above 131F and in fact still takes several hours at that temperature. For these reasons alone, it seems that continuous water heater manufacturers are rolling the dice with respect to Legionella safety and that in fact their native operating temperature should be closer to the 140 degree mark used in almost all tank based commercial domestic hot water installations.

Of course, one might think that cranking up the operating temperature of the tankless system to say 130F might solve or mitigate this problem. But since you are now delivering that water directly to the tap, you have to now worry about burning the people at the other end!  The potential scald hazard exists whenever delivering water to fixtures at temperatures above 120*F.  When storing water at the higher temperatures such as 130*F or higher to combat Legionella, one must be fully aware there is a potential scald hazard in doing so.  The following chart shows how these high water temps can quickly lead to a scald hazard:

As shown above, water temperatures that kill Legionella reliably and quickly, represent a scalding hazard when delivered directly to the user. Thus the industry standard use of a 3-way mixing valve. This problem and solution is exactly the same when using a Tankless water heating system, despite claims to the contrary by manufacturers.

In another potential selling point offered by tankless water heater manufacturers, tankless vendors attempt to make the claim that all tank based systems regardless of design, are prone to the growth of Legionella.

Instead tankless manufacturers use uncommon examples of boiler configurations and boiler designs that are not in the mainstream of applications. The examples used are extreme cases of stratification of water temperatures within a tank, claiming that the lower portion of a common water tank where the cold water feeds in, is extremely cold, below 100*F.

In fact, for most boilers and water heaters designed in this century, this is not a valid operating scenario. The “stacking” or stratification effect occurs when short or intermediate domestic draws are made on the water heater in which the draws are large enough to initiate a call for heat, but not large enough to dissipate the stored energy within the tank.  In a boiler and indirect water heater application, the stored water temperature within the tank can easily approach the boiler supply water temperature of 180F.  In fact, stratification of water temperature within the water heater is a good thing in the prevention of Legionella bacteria.  The only negative is that it presents a potential scald hazard if an ASSE 1017 mixing valve is not utilized.

Example:  A commercial 100 gallon water heater tank (direct or indirect fired type) currently stored at 140*F with 15 gal of building recirculation returning to the tank at 120*F.  There is a 10 gal domestic draw occurring with 60*F cold water entering in from the street.  What is the overall effect on the stored water within the tank assuming the tank does not initiate a call for heat during this domestic draw?

Then using the second equation we can calculate the overall effect on the stored water temperature with the water heater tank:

Again, the above calculations represent the absolute worst case as it assumes the water heater never initiated a call for heat to recover.  A typical thermostat on a water heater has a differential of 7 degrees, so there is a good possibility that the water heater is responding to this domestic draw and is adding heat.

As engineers, designers or installers of domestic hot water systems, it is our responsibility to deliver hot water to the end users in the most efficient, but safe means as possible. Tankless water heaters have many selling points for use in smaller domestic hot water delivery systems.

But the idea that these systems don’t need a mixing valve, shouldn’t be one of them.

There are 2 main areas of safety that you need to consider in that design:

The simplest way to meet both of these safety concerns is to store the domestic water at a high temperature and deliver it at a safe water temperature using an ASSE 1017 mixing valve.

It does not matter what type of water heating system you have or are considering, an ASSE 1017 mixing valve will work on all types of water heaters – tank styles or tankless.

The thing to remember as an engineer, designer or installer is that you will bear the responsibility of liability in the eyes of lawyers in the event an individual or individuals become sicken or scalded.

Overall the industry desperately needs to change its mindset with regard to the recommendations of ASHRAE 90.1 and the use and installation of a mixing valve in these settings.