As winter settles in over the northern USA, thoughts turn gingerly to the back breaking chore of shoveling snow off your driveway and walkway after each storm. Or if you own a business, paying the cost of having professional snow removal and hoping they’ll get to you before an employee slips and falls. Plus, constant plow snow removal wears down driveways and parking areas, destroys border blocking and landscaping, all leading to increased maintenance costs over time.

Hydronic Snowmelt Systems Are the way to go

For these and other reasons, many companies and homeowners, have turned to snow melting systems as an alternative to unreliable and physically difficult snow removal at homes and offices. While electric snowmelt systems are available, they are increasingly less popular than hydronic versions which are considered a “greener” and less costly solution to operate overall.

Hydronic snow melt systems in a residential application generally consist of a few parts as shown in the diagram below.

There are a few main components of your typical snow melt control system:

It turns out that Heat-Timer® has a long history of making some of the most sophisticated, and energy efficient Snow Melt Controls for both residential and commercial applications.  These controls include one of the most energy efficient control algorithms in the industry as well as making the motorized valves, and the solid brass slab sensors that become an integral part of your slab. Note that despite the sturdy design of our sensor which is meant to withstand the force of cars and trucks driving over it, the sensor is highly accurate, having temperature accuracy to 1 degree and moisture sensitivity that detects even traces of precipitation. Furthermore the sophisticated algorithm in the RSM control can operate a system using only the outdoor sensor in scenarios where introduction of slab sensors is not possible such as in retrofit applications.

There are some additional features that are common to commercial snow melt systems like our SMC Snowmelt control as show in the diagram below: 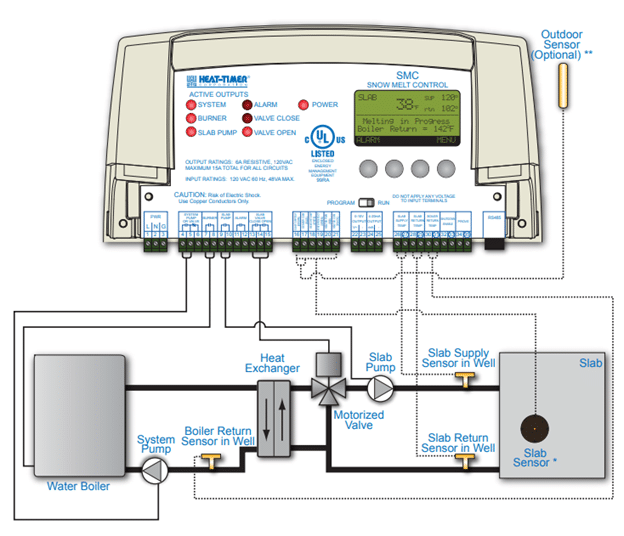 Please contact the team at Heat-Timer® for more information on using our controls in your hydronic snow melt application.