The relentless march of new technology in the area of boiler design and domestic hot water systems, have given us many new and improved components and strategies for providing safe, and more energy efficient heat and hot water. But the news is not all good: the fact is that since 2000, cases of Legionella as reported by the CDC have actually increased across the USA. While many possible reasons exist for this puzzling fact, the fact is that even the CDC doesn’t fully understand why.

Certainly, awareness of the disease has increased. Cases that were previously unknown are now properly diagnosed and easily reported on the internet. The increase in Legionella cases also does not differentiate incidents which are related to domestic hot water systems vs. those involving other systems such as cooling towers and air conditioning systems. And finally, increased aeration in the water due to low flow fixtures along with the aging population and infrastructure could also be contributing factors.

Another factor however, could be the widespread adoption of the ASHRAE 90.1 building code standard in 2001 which quickly became the standard for many building codes – both local and state.  Within ASHRAE 90.1, it was recommended hot water was not to be stored in a water heater above 120*F, recommended as a means to lower energy consumption. It further states that building recirculation must be controlled during periods of no demand.  It turns out that both of these requirements promote the growth of Legionella, as temperatures as low as 120* do not completely kill the bacteria and the resulting stagnant water within the system is an ideal breeding ground for Legionella. 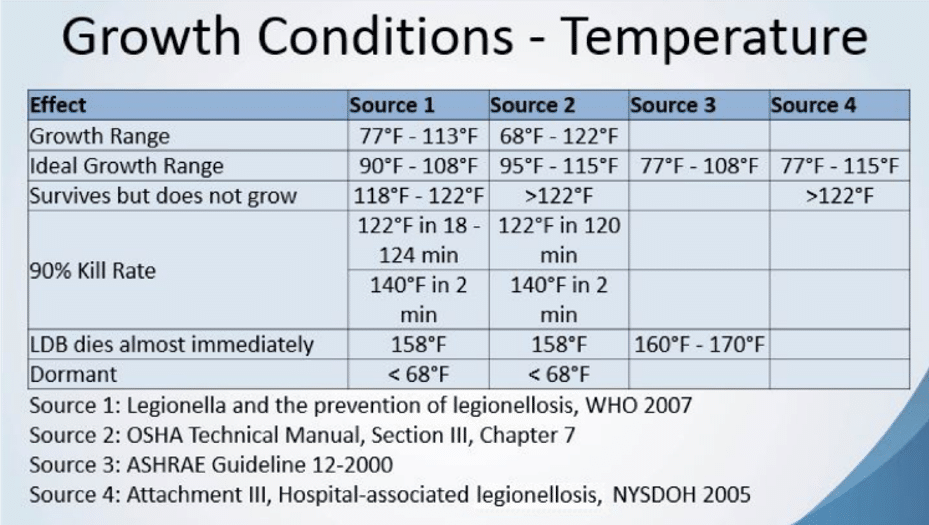 The Flip Side of Legionella Growth

Well if Legionella is such a problem, then why not crank up the temperature as recommended in the chart? It might cost a little more but that is better than making folks deathly ill isn’t it?  Now however you have a different problem, it turns out that water temperatures above 105F represent a scalding hazard for most people. And if water was delivered at the temperature needed to fully kill legionella, 3rd degree burns would ensue in less than a second of exposure.

Thus the development and widespread usage of the 3-way mixing valves that are so well known to commercial plumbing contractors. In valves like our ETV Platinum Plus, hot water reserves can remain at a temperature that is high enough to kill Legionella bacteria, but can be delivered to end users at the perfect temperature by mixing the supply with cold water.  All this is under management of our programmable control which operates our motorized 3-way mixing valve so as to provide the perfect temperature of water under all load conditions.

It is worth mentioning that those exciting new boiler technologies include “tankless systems”.  These systems represent potential solutions to domestic hot water heating for smaller commercial enterprises without the cost and complexity of installation that a full commercial boiler may require.

While there is nothing wrong with the use of the technology per se,  many manufacturers have embraced the selling point that these systems obviate the need for a mixing valve to deliver Legionella free hot water. The problem in this logic is that they have largely embraced the idea that being ASHRAE 90.1 compliant, they are compliant solutions for Legionella prevention when in fact as we’ve just discussed, ASHRAE 90.1 is fundamentally flawed in its recommendations with respect to Legionella safety.

In our next blog, we’ll discuss in more detail, the danger that these claims can represent for installers, and science behind exactly why these tankless systems can represent a Legionella risk if not installed properly.